You are in: Home > News > CONDITIONS AND TEAM HAWAII OFFER CHALLENGES AT 7th HAPALUA

Honolulu, HI – Hapalua is the Hawaiian word for half, but today’s 7th Hapalua, Hawaii’s Half Marathon, was a full measure by anyone’s standards. Under unusually high humidity, defending champion Philip Tarbei of Kenya was able to overcome both the conditions and the head starts afforded all 24 Team Hawaii runners to become the first person to win a second Hapalua title. His 64:14 winning time was 47-seconds slower than last year’s course record, and the outcome of the unique Chase format pitting Hawaii’s best against the Kenyan pros was not decided until the finish line banner came into view in Kapiolani Park.

Eventual champion Philip Tarbei closes in on Team Hawaii’s Patrick Stover in Kapiolani Park within sight of the finish.

“I was not sure I could win because of the high humidity,” said the 25 year-old Tarbei from Iten, Kenya, “I’ve never run in anything like this before.”

After the 24 Team Hawaii runners took off with leads of 24 to 8 minutes, Tarbei, his pacer Daniel Chebii and Kuaui native Pierce Murphy lit out giving Chase.

Murphy was an eight-time All-American for the Colorado Buffaloes, but after hanging with the two world class Africans through 4K (12:02), he began to drift away, finally finishing in over 68 minutes.

5k splits of 15:03 and 15:18 with his pacer Daniel Chebeii brought Tarbei into the Team Hawaii hunting grounds as the course turned onto Monsarrat Avenue at 15k for a mile long climb on the backside of the Diamond Head crater.

Philip Tarbei chases down Team Hawaii up the backside of Diamond Head in Mile 10. (photo courtesy of IsnTsang)

In previous years, the invited pros had begun to swallow up Team Hawaii runners by halfway. But this year it wasn’t till 13k (39:24) that the Team Hawaii blue singlets began to disappear behind Tarbei and Chebii. Two kilometers later Chebeii, the two-time defending BAA 10k champion, began to falter, too.

Just two weeks ago, Philip Tarbei finished 6th at the Vandeloop Half Marathon in 60:48. Under today’s adverse conditions and over a course with two stern hills in the final 6k, he took almost four minutes longer to finish the 21.1k distance.

Gobbling up Team Hawaii runners going up Monsarrat, then again up the front side of Diamond Head, Patrick still had work to do. Entering Kapiolani Park for the final kilometer, he had a single Team Hawaii runner left to collect, Patrick Stover of the Big Island. But then the conditions rose up to offer an unexpected challenge.

“Just as I entered the park, I had to slow down because I was almost going to vomit due to the high humidity,” admitted Tarbei. “But after slowing down, I felt better and could continue.”

Philip Tarbei wins his second Hapalua Half in 64:14  (photo courtesy of Ian Tsang)

With Tarbei’s second win, the pros went ahead of the Joes 4-3 in the Chase series. A record 9200 runners signed up for the 2018 Hapalua, the sixth straight increase in this Honolulu Marathon sister race.

This December Patrick Tarbei will return to Honolulu for his debut over the full marathon distance. After today’s effort, though, he may already think he knows how one feels. 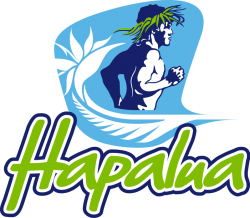